In third year at UBC I embarked on an academic exchange to two host universities. My first host institution was Trinity College Dublin, or Dublin University, the oldest university in Ireland. The thought of attending the same institution as such brilliant minds as Samuel Beckett, Oscar Wilde, and Bram Stoker first drew me to Trinity, but the theatre culture in Dublin was what sealed the deal.

When I arrived in Dublin, I immediately immersed myself in activities on campus. I joined the Player's Society, the most active student drama society in Europe, producing two shows every week and creating many original productions every year.

I did my best to immerse myself in professional Theatre during my time in Dublin. Within the first month that I was there Dublin hosted a fringe festival, a theatre festival, and an arts and human rights festival. I was also lucky enough to see the work that the undergraduate students at Trinity were producing within the Drama department. The main stage productions that were produced were astounding in their design and performance, and I would say they were comparable to professional productions I have seen. 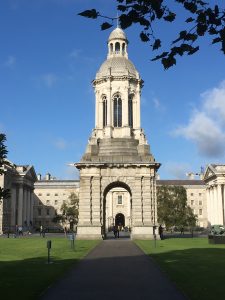 Academically, I enrolled in six modules for the semester, including classes in developmental psychology, policy and the behavioural sciences, devised theatre, and socially engaged drama practice. Each of these modules was assessed by one final paper, which present the daunting task of summarising a whole semester's worth of knowledge into three thousand words. The teaching style in Ireland's post secondary system is also much more independent than I was used to. My contact time with professors was limited to one hour every week, and then supplemented by readings from journal articles and my own research beyond the course material. This independent style of learning was completely new to me and quite daunting at the outset, but I am now grateful for the skills in initiative, organisation, and creativity this has left me with.

During my stay in Ireland I made sure to get out and explore the beautiful country when I could. I visited small seaside towns like Dalkey and famous cities like Galway. I also did my best to learn the Irish language while I was there, with help from my lovely Irish friends who were very proud to share this tradition with me.

Overall, during my stay in Ireland I was exposed to a culture I had no idea was so different from my own. In my academic work I studied psychological research conducted in a cultural setting very different from my own, and saw how culture and values can impact human behaviour. In the theatre I experienced I also saw how the politics and pride of a nation comes through in their storytelling. This experience really opened my eyes to the ways our home affects how we think, feel, and create, and I hope to apply this lens to my work from now on.